The World Health Organization (WHO) has released World Malaria Report 2019.

In November 2018, WHO and the Roll Back Malaria (RBM) Partnership to End Malaria launched the high burden to high impact (HBHI) country-led approach as a mechanism to bring the 11 highest burden countries back on track to achieve the 2025 Global Technical Strategy (GTS) milestones.

This followed the results of the world malaria reports of 2017 and 2018, which showed that, globally, progress has stalled in high-burden countries and that the GTS 2020 milestones are, therefore, unlikely to be achieved. These 11 countries 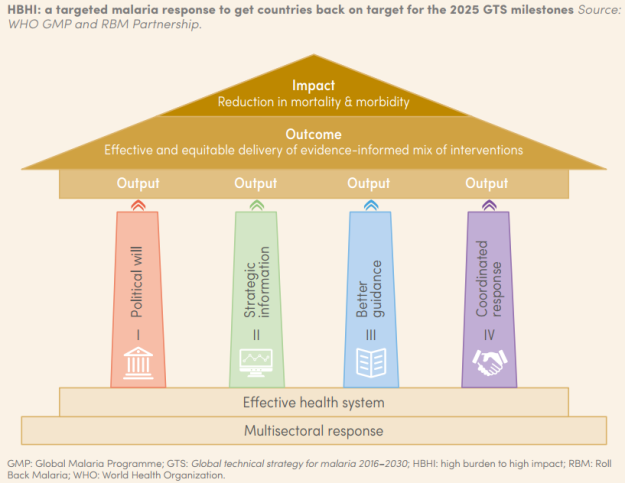 1. Trends in Regional and Global Burden of Cases and Deaths

Most malaria cases in 2018 were in the World Health Organization (WHO) African Region (213 million or 93%), followed by the WHO South-East Asia Region with 3.4% of the cases and the WHO Eastern Mediterranean Region with 2.1%.

Nineteen countries in sub-Saharan Africa and India carried almost 85% of the global malaria burden. Six countries accounted for more than half of all malaria cases worldwide:

The WHO South-East Asia Region continued to see its incidence rate fall – from 17 cases of the disease per 1000 population at risk in 2010 to five cases in 2018 (a 70% decrease). In the WHO African Region, case incidence levels also declined from 294 in 2010 to 229 in 2018, representing a 22% reduction. All other WHO regions recorded either little progress or an increase in incidence rate. The WHO Region of the Americas recorded a rise, largely due to increases in malaria transmission in the Bolivarian Republic of Venezuela.

Between 2015 and 2018, only 31 countries, where malaria is still endemic, reduced case incidence significantly and were on track to reduce incidence by 40% or more by 2020. Without accelerated change, the Global technical strategy for malaria 2016–2030 (GTS) milestones for morbidity in 2025 and 2030 will not be achieved.

Plasmodium falciparum is the most prevalent malaria parasite in the WHO African Region, accounting for 99.7% of estimated malaria cases in 2018, as well as in the WHO South-East Asia Region (50%), the WHO Eastern Mediterranean Region (71%) and the WHO Western Pacific Region (65%).

Globally, 53% of the P. vivax burden is in the WHO South-East Asia Region, with the majority being in India (47%). P. vivax is the predominant parasite in the WHO Region of the Americas, representing 75% of malaria cases.

Children aged under 5 years are the most vulnerable group affected by malaria. In 2018, they accounted for 67% (272 000) of all malaria deaths worldwide.

In 2018, about 11 million pregnancies in moderate and high transmission sub-Saharan African countries would have been exposed to malaria infection.

In 2018, prevalence of exposure to malaria infection in pregnancy was highest in the West African subregion and Central Africa (each with 35%), followed by East and Southern Africa (20%). About 39% of these were in the Democratic Republic of the Congo and Nigeria.

Between 2015 and 2018 in 21 moderate to high malaria burden countries in the WHO African Region, the prevalence of anaemia in children under 5 years with a positive rapid diagnostic test (RDT) was double that of children with a negative RDT. In the children who were positive for malaria, 9% had severe anaemia and 54% had moderate anaemia; in contrast, in the children without malaria, only 1% had severe anaemia and 31% had moderate anaemia.

The countries with the highest percentage of severe anaemia among children aged under 5 years who were positive for malaria were Senegal (26%), Mali (16%), Guinea (14%) and Mozambique (12%). For most other countries, severe anaemia ranged from 5% to 10%.

Overall, about 24 million children were estimated to be infected with P. falciparum in 2018 in sub-Saharan Africa, and an estimated 1.8 million of them were likely to have severe anaemia.

There were about 155 million malaria cases in the 11 high burden to high impact (HBHI) countries in 2018, compared with 177 million in 2010. The Democratic Republic of the Congo and Nigeria accounted for 84 million (54%) of total cases.

Of the 10 highest burden countries in Africa, Ghana and Nigeria reported the highest absolute increases in cases of malaria in 2018 compared with 2017. The burden in 2018 was similar to that of 2017 in all other countries, apart from in Uganda and India, where there were reported reductions of 1.5 and 2.6 million malaria cases, respectively, in 2018 compared with 2017.

By 2018, in all of the 11 HBHI countries, at least 40% of the population at risk were sleeping under long-lasting insecticidal nets (LLINs), the highest percentage being in Uganda (80%) and the lowest in Nigeria (40%).

Only Burkina Faso and the United Republic of Tanzania were estimated as having more than half of pregnant women receiving three doses of intermittent preventive treatment in pregnancy (IPTp3) in 2018. In Cameroon, Nigeria and Uganda, the estimated coverage was about 30% or less.

Six countries in Africa’s Sahel subregion implemented seasonal malaria chemoprevention (SMC) in 2018; a mean total of 17 million children, out of the 26 million targeted, were treated per SMC cycle.

The percentage of children aged under 5 years with fever seeking treatment varied from 58% in Mali to 82% in Uganda. In the Democratic Republic of the Congo and Mali, more than 40% of children were not brought for care at all. Testing was also worryingly low in children who were brought for care, with 30% or less being tested in Cameroon, the Democratic Republic of the Congo and Nigeria.

Link to the related WHO news release: