The World Health Organization (WHO) has released a new report (Global Assessment and Analysis of Sanitation and Drinking-Water 2019, GLAAS 2019) on behalf of UN-Water today.

The main objective of GLAAS is to monitor components of Water Sanitation and Hygiene (WASH) systems, including governance, monitoring, finance, and human resources necessary to sustain and extend WASH services to all, and especially to the most vulnerable population groups. GLAAS
collects information on WASH status and trends directly from national governments and External Support Agencies (ESAs) through country and ESA surveys

The UN-Water Global Assessment and Analysis of Sanitation and Drinking-Water 2019 (known as the GLAAS report) surveyed 115 countries and territories, representing 4.5 billion people.

In 2019, the GLAAS report celebrates its 10th anniversary after successfully completing a pilot in 2008 and four two-year cycles to date. In this fifth cycle, GLAAS covers four key areas of water, sanitation and hygiene systems (governance, monitoring, human resources and finance) with a special focus on policies, plans and targets.

There is widespread recognition that sustainable and effective WASH service delivery is not only determined by the state of infrastructure, but also by complex institutional, governance and financial management systems.

While a “system” may be interpreted or defined in different ways, core elements examined by the UN-Water Global Analysis and Assessment of Sanitation and Drinking-Water (GLAAS) initiative include the extent to which countries 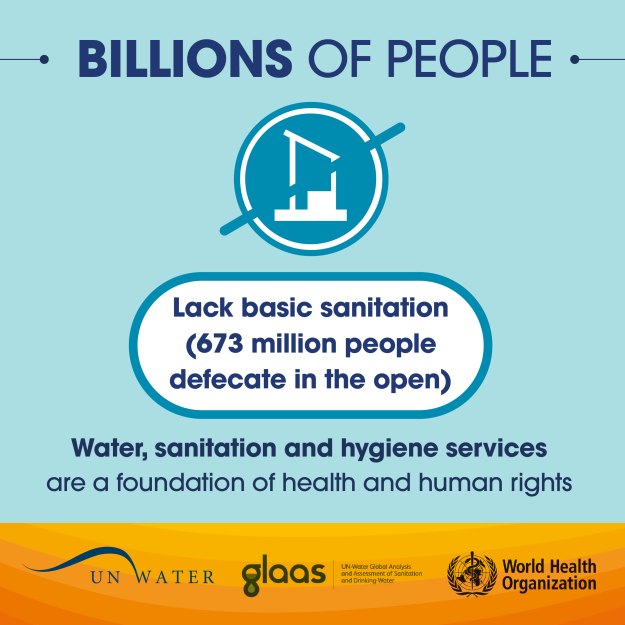 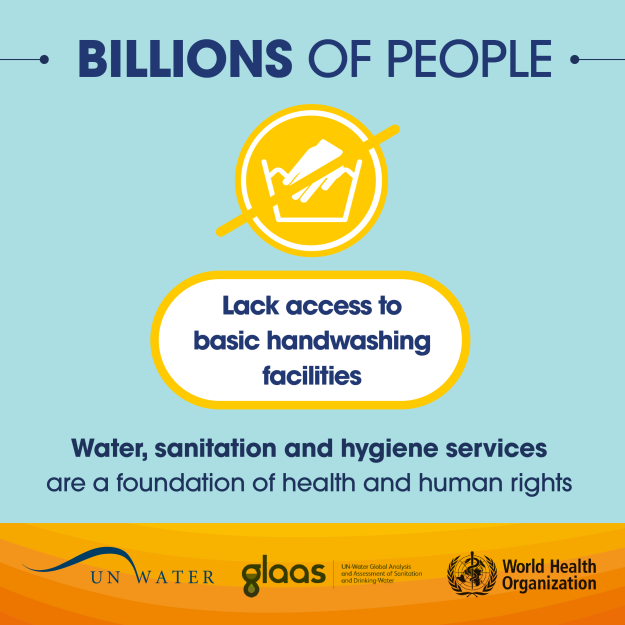 Implementation of national WASH policies and plans is constrained by inadequate human and financial resources.

The majority of countries have national WASH policies supported by national plans with most countries drawing evidence from regular sector performance reviews such as joint sector reviews (JSRs).

While many countries estimated the cost of implementing their national WASH plans, less than 15% of countries reported having sufficient financial resources to implement these plans.

Overall, plans are rarely supported by the necessary financial and human resources, which hinders their implementation and intended outcomes for WASH service delivery. 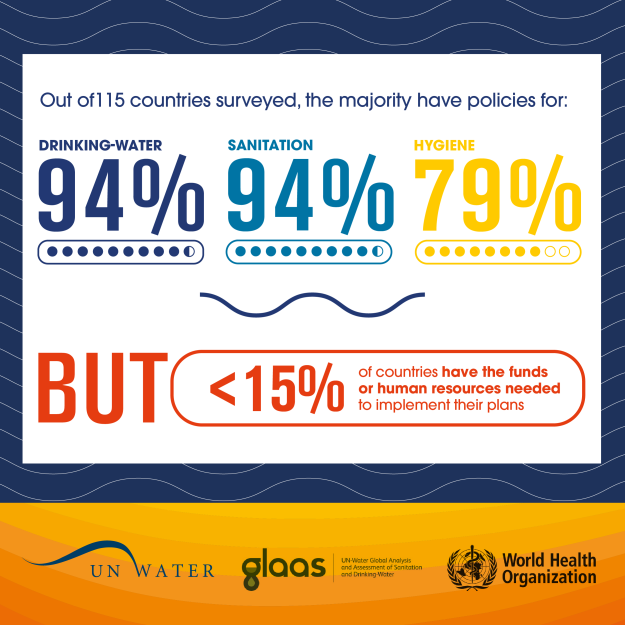 While most countries have national standards for drinking-water and wastewater, institutions tasked with regulatory oversight for WASH service delivery are stretched and unable to undertake the required surveillance.

Only 12% of countries reported that urban drinking-water surveillance is conducted at 100% of the required frequency.

Fewer than one third of regulatory authorities fully publish publicly available reports for drinking-water and sanitation.

Insufficient funds and insufficient human resources are often a major constraint in drinking-water and sanitation surveillance and oversight. In addition, fewer than half of regulatory authorities fully take corrective actions against non-performers.

National financial systems to support decision-making should be strengthened.

While most countries have financing plans for WASH, more than half of these plans are insufficiently used in decision-making.

More than 75% of countries did not report disaggregated budget or expenditure data for drinking-water and sanitation, which suggests that systems for collecting comprehensive financial data in most countries may be lacking.

Furthermore, fewer than half of the countries reported use of performance indicators on expenditure and cost-effectiveness, potentially limiting the ability of governments to make informed adjustments in WASH budget allocations or spending priorities.

National WASH targets are increasingly reflecting SDG ambitions, aiming to provide universal coverage and reach higher levels of service. However, a dramatic increase in performance will be required to achieve these targets.

Approximately half of countries have set drinking-water targets that aim for universal coverage at levels higher than basic services by 2030. This signals that countries are extending efforts to reflect elements of the Sustainable Development Goals (SDGs) in national targets.

Consequently, many countries will need to increase coverage by an annual rate beyond the fastest rates of progress ever recorded by JMP to reach their own WASH targets. 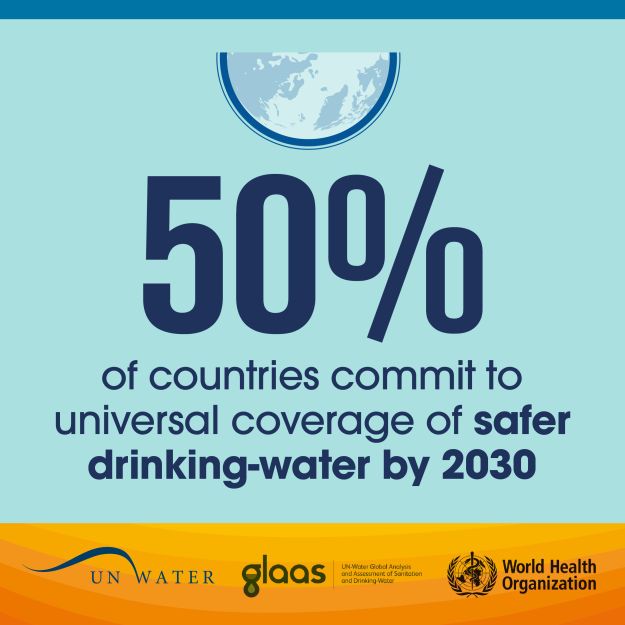 Large funding gaps remain between what is needed to reach WASH targets and what is available.

Twenty countries and territories reported a funding gap of 61% between identified needs and available funding. This is the first time that GLAAS findings have enabled estimation of the magnitude of the shortfall.

There has been a modest increase in government WASH budgets compared to the GLAAS 2016/2017 cycle; however, insufficient funding remains a serious issue for countries to achieve their national targets.

Countries are responding to the “leave no one behind agenda” by establishing policy measures to reach populations living in vulnerable situations.

Over two thirds of countries have measures in policies and plans to reach poor populations, but less than 40% have corresponding measures for financing these efforts that are consistently applied.

Countries also reported that they are seeking to make WASH services affordable through policy measures and financial schemes, mostly for urban water supply. However, systems to monitor and finance these measures are not always in place, indicating that the level of implementation is insufficient. 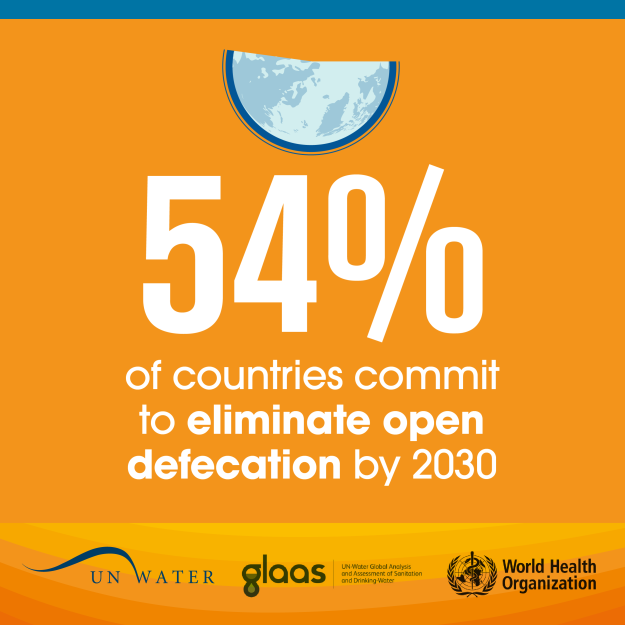 External support agencies (ESAs) are increasingly aligning their objectives with the SDGs and prioritizing a focus on WASH systems strengthening.

Since 2017, the majority of multiyear ESA WASH strategies have been revised with
objectives that align with the 2030 Agenda. Strengthening country systems or systems approaches were rated as high priority activities in WASH among ESAs, and major themes in several ESA water/WASH strategies.

Official development assistance (ODA) commitments for WASH are rising, signalling the continued resolve of the international community to make progress on WASH.

There are indications of shifts in aid targeting, with aid allocated to Sub-Saharan Africa almost doubling between 2015 and 2017.