The World Health Organization (WHO) has updated its fact sheet on Trachoma.

Trachoma is the leading infectious cause of blindness worldwide, and is caused by an obligate intracellular bacterium called Chlamydia trachomatis.

The infection is transmitted by direct or indirect transfer of eye and nose discharges of infected people, particularly young children who harbour the principal reservoir of infection. These discharges can be spread by particular species of flies.

Environmental risk factors influencing the transmission of the disease include:

In areas where trachoma is endemic, active (inflammatory) trachoma is common among preschool-aged children, with prevalence rates which can be as high as 60–90%. Infection becomes less frequent and shorter in duration with increasing age. Infection is usually acquired when living in close proximity to others with active disease, and the family is the main setting for transmission. An individual’s immune system can clear a single episode of infection, but in endemic communities, re-acquisition of the organism occurs frequently.

Trachoma is a disease of the eye caused by infection with the bacterium Chlamydia trachomatis.

It is a public health problem in 44 countries, and is responsible for the blindness or visual impairment of about 1.9 million people.

Based on March 2019 data, 142 million people live in trachoma endemic areas and are at risk of trachoma blindness.

Blindness from trachoma is irreversible.

Visual impairment or blindness results in a worsening of the life experience of affected individuals and their families, who are normally already amongst the poorest of the poor.

Women are blinded up to 4 times as often as men, probably due to their close contact with infected children and their resulting greater frequency of infection episodes.

Infection spreads through personal contact (via hands, clothes or bedding) and by flies that have been in contact with discharge from the eyes or nose of an infected person.

After years of repeated infection, the inside of the eyelid can become so severely scarred (trachomatous conjunctival scarring) that it turns inwards and causes the eyelashes to rub against the eyeball (trachomatous trichiasis), resulting in constant pain and light intolerance; this and other alterations of the eye can lead to scarring of the cornea. Left untreated, this condition leads to the formation of irreversible opacities, with resulting visual impairment or blindness. The age at which this occurs depends on several factors including local transmission intensity. In very highly endemic communities, it can occur in childhood, though onset of visual impairment between the ages of 30 and 40 years is more typical. 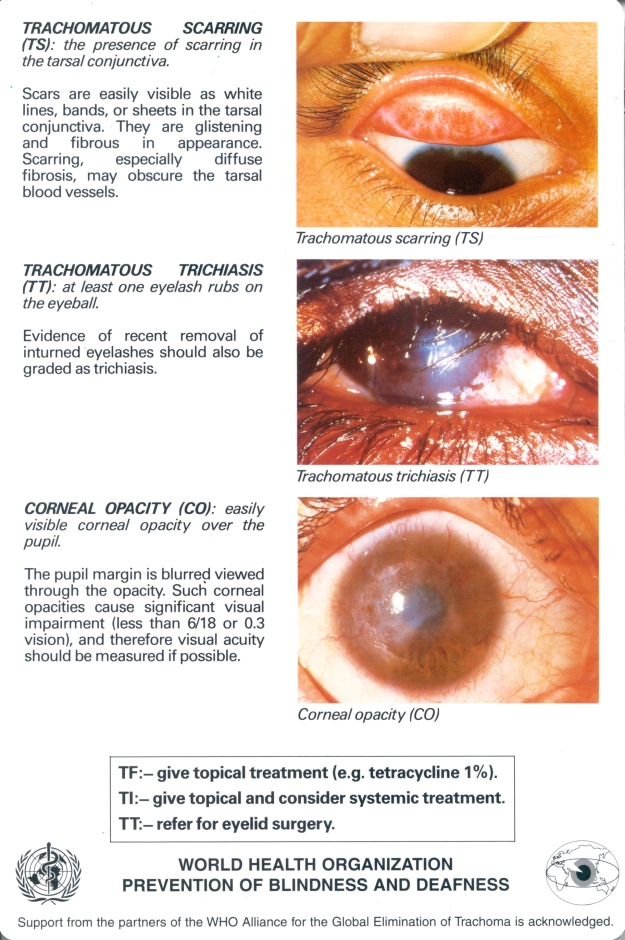 The economic cost in terms of lost productivity from blindness and visual impairment is estimated at US$ 2.9–5.3 billion annually, increasing to US$ 8 billion when trichiasis is included.

The World Health Assembly adopted resolution WHA51.11 in 1998, targeting the global elimination of trachoma as a public health problem.

Elimination programmes in endemic countries are being implemented using the WHO-recommended SAFE strategy. This consists of:

In 2018, 146 112 people received surgical treatment for advanced stage of the disease, and 89.1 million people were treated with antibiotics. Global-level antibiotic coverage in 2018 was 50%.

Link to related WHO news release:

Link to WHO page ‘What is Trachoma?’:

Link to WHO Guidelines for Rapid Assessment for blinding trachoma: