The World Health Organization (WHO) has recently released the Global Status Report on Alcohol and Health 2018.

Alcohol is a psychoactive substance with dependence-producing properties that has been widely used in many cultures for centuries.

An estimated 2.3 billion people are current drinkers. Alcohol is consumed by more than half of the population in three WHO regions – the Americas, Europe and the Western Pacific. Europe has the highest per capita consumption in the world.

Current trends and projections point to an expected increase in global alcohol per capita consumption in the next 10 years, particularly in the South-East Asia and Western Pacific Regions and the Region of the Americas.

The impact of alcohol consumption on chronic and acute health outcomes in populations is largely determined by 2 separate but related dimensions of drinking:

Harms from a given amount and pattern of drinking are higher for poorer drinkers and their families than for richer drinkers in any given society (Schmidt & Room, 2012). This greater “harm per litre” is a consistent finding for many different kinds of harms from drinking – e.g. chronic diseases such as liver cirrhosis; injuries from drinking, both to the drinker and to others around the drinker; and infectious diseases where drinking plays a role in vulnerability to or spread of the infection or in disrupting the treatment regime.

Worldwide, more than 3 million deaths (representing 1 in 20 deaths) result from harmful use of alcohol each year. This represent 5.3 % of all deaths.

Of all deaths attributable to alcohol, 28% were due to injuries, such as those from traffic crashes, self-harm and interpersonal violence; 21% due to digestive disorders; 19% due to cardiovascular diseases, and the remainder due to infectious diseases, cancers, mental disorders and other health conditions.

Mortality resulting from alcohol consumption is higher than that caused by diseases such as tuberculosis, HIV/AIDS and diabetes.

Worldwide, alcohol was responsible for 7.2% of all premature (among persons 69 years of age and younger) mortality in 2016. People of younger ages were disproportionately affected by alcohol compared to older persons.

Globally, an estimated 237 million men and 46 million women suffer from alcohol-use disorders with the highest prevalence among men and women in the European region (14.8% and 3.5%) and the Region of Americas (11.5% and 5.1%). Alcohol-use disorders are more common in high-income countries.

Overall 5.1 % of the global burden of disease and injury is attributable to alcohol, as measured in disability-adjusted life years (DALYs).

The average daily consumption of people who drink alcohol is 33 grams of pure alcohol a day, roughly equivalent to 2 glasses (each of 150 ml) of wine, a large (750 ml) bottle of beer or two shots (each of 40 ml) of spirits. 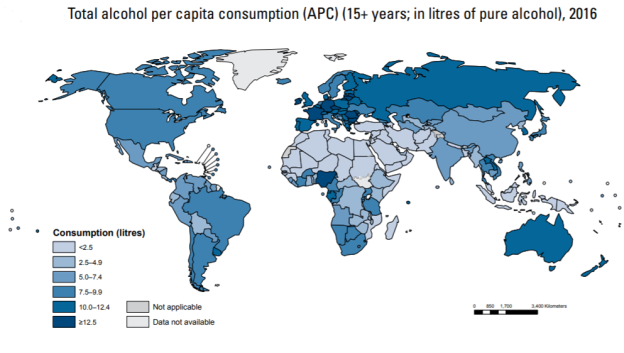 School surveys indicate that, in many countries, alcohol use starts before the age of 15 with very small differences between boys and girls.

There are gender differences in alcohol-related mortality and morbidity, as well as levels and patterns of alcohol consumption. The percentage of alcohol-attributable deaths among men amount to 7.7 % of all global deaths compared to 2.6 % of all deaths among women. Total alcohol per capita consumption in 2010 among male and female drinkers worldwide was on average 19.4 litres for males and 7.0 litres of pure alcohol for females.

In all WHO regions, females are less often current drinkers than males, and when
women drink, they drink less than men. Worldwide, the prevalence of women’s
drinking went down in most regions of the world, except in the South-East Asia and Western Pacific Regions, but the absolute number of currently-drinking women has increased in the world.

Prevalence of current drinking by WHO Region and Gender (2000-2016)

Worldwide, 45% of total recorded alcohol is consumed in the form of spirits. Beer is the second alcoholic beverage in terms of pure alcohol consumed (34%) followed by wine (12%). Worldwide there have been only minor changes in preferences of alcoholic beverages since 2010. The largest changes took place in Europe, where consumption of spirits decreased by 3% whereas that of wine and beer increased.

In contrast, more than half (57%, or 3.1 billion people) of the global population aged 15 years and over had abstained from drinking alcohol in the previous 12 months.

Prevalence of heavy episodic drinking (HED) (defined as 60 or more grams of pure
alcohol on at least one occasion at least once per month) has decreased globally from
22.6% in 2000 to 18.2% in 2016 among the total population, but remains high among
drinkers, particularly in parts of Eastern Europe and in some sub-Saharan African
countries (over 60% among current drinkers).

Alcohol consumption causes death and disability relatively early in life. In the age group 20–39 years approximately 13.5 % of the total deaths are alcohol-attributable.

Harmful use of alcohol is a causal factor in more than 200 disease and injury conditions.

There is a causal relationship between harmful use of alcohol and a range of mental and behavioural disorders, other noncommunicable conditions as well as injuries.

The latest causal relationships have been established between harmful drinking and incidence of infectious diseases such as tuberculosis as well as the course of HIV/AIDS.

Beyond health consequences, the harmful use of alcohol brings significant social and economic losses to individuals and society at large.

Substantial scientific knowledge exists for policy-makers on the effectiveness and cost-effectiveness of the following strategies:

Almost all (95%) countries have alcohol excise taxes, but fewer than half of them
use the other price strategies such as adjusting taxes to keep up with inflation and
income levels, imposing minimum pricing policies, or banning below-cost selling or
volume discounts.

Link to the related WHO news release:

Link to updated WHO factsheet on alcohol:

Link to WHO infographic on alcohol and health (PDF):