The global population of people aged 60 years and older will more than double, from 900 million in 2015 to about 2 billion in 2050, with the vast majority of older people living in low- and middle-income countries.

Elder abuse is a single or repeated act, or lack of appropriate action, occurring within any relationship where there is an expectation of trust, which causes harm or distress to an older person.

This type of violence includes 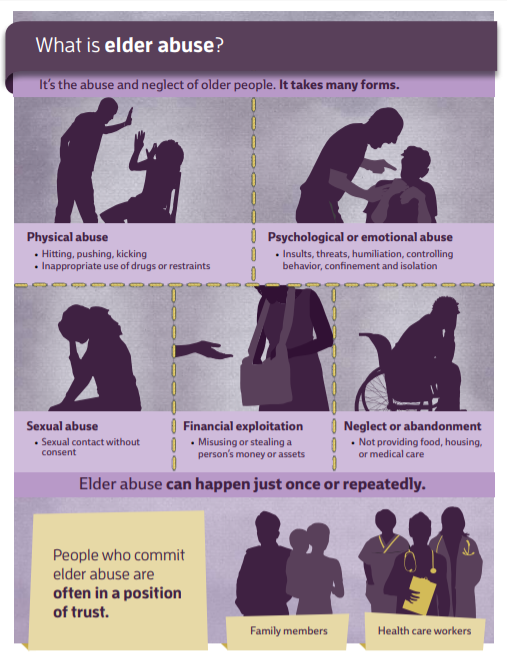 Around 1 in 6 people 60 years and older experienced some form of abuse in community settings during 2017.

If the proportion of elder abuse victims remains constant, the number of victims will increase rapidly due to population ageing, growing to 320 million victims by 2050.

Rates of elder abuse are high in institutions such as nursing homes and long-term care facilities, with 2 in 3 staff reporting that they have committed abuse in the past year.

Abusive acts in institutions may include

Within institutions, abuse is more likely to occur where:

• standards for health care, welfare services, and care facilities for elder persons are low;
• staff are poorly trained, remunerated, and overworked;
• the physical environment is deficient; and
• policies operate in the interests of the institution rather than the residents.

Elder abuse is predicted to increase as many countries are experiencing rapidly ageing populations.

In cultures where women have inferior social status, elderly women are at higher risk of neglect and financial abuse (such as seizing their property) when they are widowed. Women may also be at higher risk of more persistent and severe forms of abuse and injury.

A shared living situation is a risk factor for elder abuse.

An abuser’s dependency on the older person (often financial) also increases the risk of abuse. In some cases, a long history of poor family relationships may worsen as a result of stress when the older person becomes more care dependent.

Social isolation of caregivers and older persons, and the ensuing lack of social support, is a significant risk factor for elder abuse by caregivers.

Socio-cultural factors that may affect the risk of elder abuse include:

Interventions that have been implemented – mainly in high-income countries – to prevent abuse include:

Efforts to respond to and prevent further abuse include interventions such as:

Evidence for the effectiveness of most of these interventions is limited at present. However, caregiver support after abuse has occurred reduces the likelihood of its reoccurrence and school-based intergeneration programmes (to decrease negative societal attitudes and stereotypes towards older people) have shown some promise.

Evidence suggests that adult protective services and home visitation by police and social workers for victims of elder abuse may in fact have adverse consequences, increasing elder abuse.

Link to WHO factsheet on Elder Abuse:

Link to studies on consequences of elder abuse (visualizations):

Link to ‘Elder abuse prevalence in community settings’ article in The Lancet (free):