This article will discuss three aspects- learning, memory and retention.

Learning refers to the process of acquiring new knowledge and skills.

Memory refers to the process by which the knowledge and skills are retained for the future.

Memories are formed when a group of neurons fires together when activated. They are stored in pieces and distributed throughout the cerebrum.

The previous article described the stages of memory:

Long-Term memory is of two types:

Learning is the process by which the interplay of the brain, environment, and nervous system acquires information and skills.

Retention requires conscious attention by the learner, and building of conceptual frameworks that have sense and meaning for long-term storage.

What affects Retention of Learning?

The long-term retention of cognitive concepts is not possible without rehearsal.

When information first enters working memory, it is Initial rehearsal. If sense or meaning is not attached, and there is no time for processing, the information will probably be lost.

Secondary rehearsal occurs when enough time is allowed to review the information, make sense of it, extract the details, and assign relevance as well as value.

Closure: secondary rehearsal performed at the end of a learning episode

Rote Rehearsal: used when there is a need to remember and store the information precisely as entered into working memory

Elaborative Rehearsal: employed when it is important to associate new learning with past knowledge, and the information need not be stored exactly as learned.

This refers to a common phenomenon wherein we tend to remember best:

3. Duration of the learning episode

Two 20-minute sessions will be more effective than a single 40-minute episode.

Learners who teach others, or use the new learning immediately, retain 90% after 24 hours.

This supports the adage ‘teaching is learning twice’. (It also explains why teachers retain so much of the content.)

Learning is accelerated when new content is practiced frequently in a short time span. This is called massed learning. However, if it is not rehearsed quickly, it will drop out of the system. 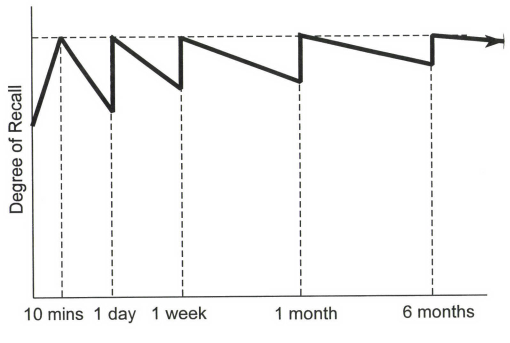 Sustained practice over time, called distributed practice, is the key to learning.

Caution: Whatever is learned first should be correct- relearning is very difficult and time-consuming.

Learners who get less sleep are more likely to get poorer grades than those who sleep longer.

There are two methods for retrieval

In both methods, neurons must fire along pathways to the storage sites and back to working memory. The more often this happens, the easier it is to retrieve information, and vice-versa.

The rate of retrieval depends on the nature of the learner’s storage method- a learned skill- rather than on intelligence.

The rate of learning and retrieval are independent of each other.

When the working memory recognizes a set of data as a single item, it is termed chunking.

Example 1: The word chunking is recognized as one word, instead of 8 separate letters.

Example 2: Try remembering the following letters after looking at them for just 10 seconds:

Now try the same with the letters below:

You may have noticed that the sequences are identical, except that the letters are grouped (chunked) differently. However, the new grouping has more meaning than the original.

Chunking is an effective way of enlarging the capacity of the working memory, and to help learners make associations that establish meaning.

This may be due to losing the neural pathways to long-term storage sites, and happens when a memory is not retrieved for a long time.

When memories are frequently recalled, the networks strengthen with each rehearsal, and is called consolidation. This enables retrieval over decades if there is frequent recall.

Almost no cognitive concepts can be retained without rehearsal.

The rate of retrieval depends upon the method of information storage- a learned skill- not intelligence.

Chunking allows learners to increase the capacity of working memory.

Forgetting is often because the neural pathways have been lost due to infrequent retrieval.