The World Health Organization (WHO) has updated its fact sheet on climate change and health.

Over the last 50 years, human activities – particularly the burning of fossil fuels – have released sufficient quantities of carbon dioxide and other greenhouse gases to trap additional heat in the lower atmosphere and affect the global climate.

High temperatures also raise the levels of ozone and other pollutants in the air that exacerbate cardiovascular and respiratory disease.

Pollen and other aeroallergen levels are also higher in extreme heat. These can trigger asthma, which affects around 300 million people.

Globally, the number of reported weather-related natural disasters has more than tripled since the 1960s. Every year, these disasters result in over 60 000 deaths, mainly in developing countries.

More than half of the world’s population lives within 60 km of the sea.

Increasingly variable rainfall patterns are likely to affect the supply of fresh water. A lack of safe water can compromise hygiene and increase the risk of diarrhoeal disease, which kills over 500 000 children aged under 5 years, every year.

In extreme cases, water scarcity leads to drought and famine. By the late 21st century, climate change is likely to increase the frequency and intensity of drought at regional and global scale.

Rising temperatures and variable precipitation are likely to decrease the production of staple foods in many of the poorest regions. This will increase the prevalence of malnutrition and undernutrition, which currently cause 3.1 million deaths every year.

Changes in climate are likely to lengthen the transmission seasons of important vector-borne diseases and to alter their geographic range.

Malaria is strongly influenced by climate. The Aedes mosquito vector of dengue is also highly sensitive to climate conditions, and studies suggest that climate change is likely to continue to increase exposure to dengue.

Between 2030 and 2050, climate change is expected to cause approximately 250 000 additional deaths per year, from malnutrition, malaria, diarrhoea and heat stress: 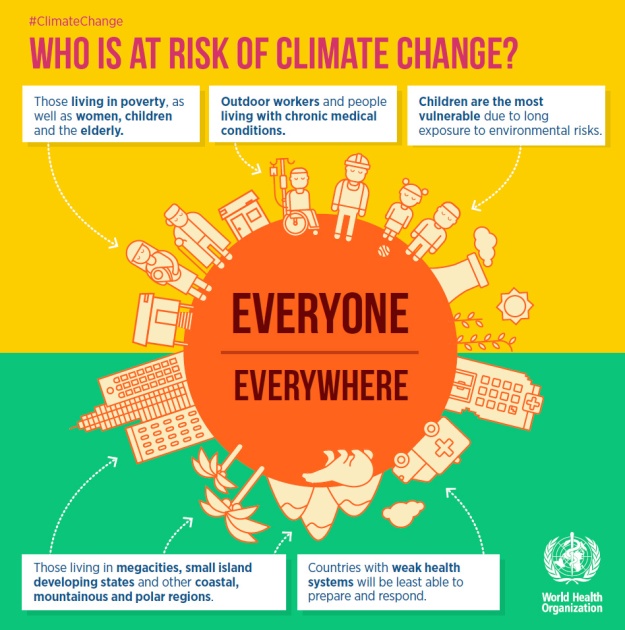 The direct damage costs to health (i.e. excluding costs in health-determining sectors such as agriculture and water and sanitation), is estimated to be between US$ 2-4 billion/year by 2030.

Areas with weak health infrastructure – mostly in developing countries – will be the least able to cope without assistance to prepare and respond.

Link to WHO page on climate change and health:

Link to WHO infographics on climate change (English) [JPEG]: