The World Health Organization (WHO) has updated its fact sheet on the Top 10 causes of death worldwide.

Measuring how many people die each year and why they died is one of the most important means – along with gauging how diseases and injuries are affecting people – for assessing the effectiveness of a country’s health system.

A country in which deaths from heart disease and diabetes rise rapidly over a period of a few years, for example, has a strong interest in starting a vigorous programme to encourage lifestyles to help prevent these illnesses.

Similarly, if a country recognizes that many children are dying of pneumonia, but only a small portion of the budget is dedicated to providing effective treatment, it can increase spending in this area.

Ischemic heart disease and stroke maintain their position as the leading killers, accounting for 15 million deaths in 2015.

Deaths due to dementias more than doubled between 2000 and 2015, making it the 7th leading cause of global deaths in 2015.

Lower respiratory tract infections were the deadliest communicable disease in 2015, and was responsible for 3.2 million deaths globally.

Although the death rate from diarrhoeal diseases almost halved between 2000 and 2015, they killed 1.4 million individuals in 2015.

Similarly, fewer people died of tuberculosis, but with 1.4 million deaths in 2015, it remains one of the top 10 killers. 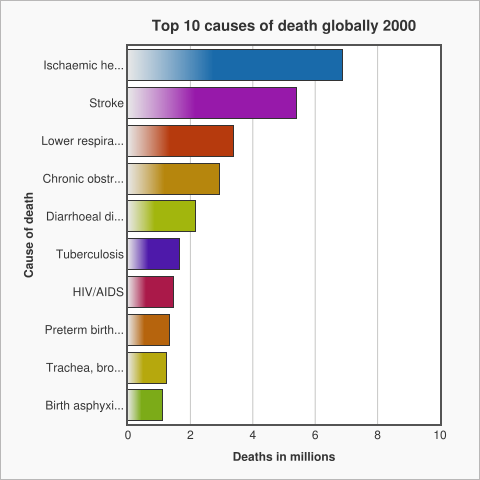 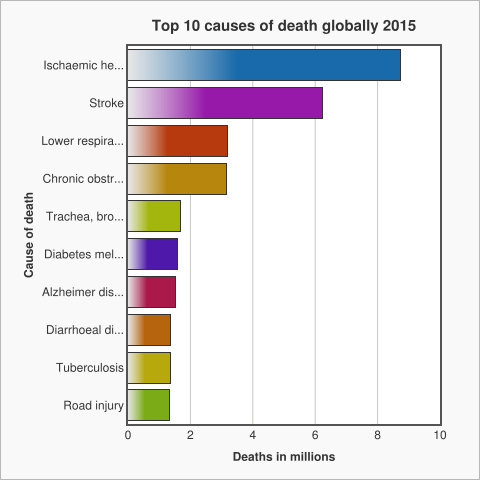 More than 52% of all deaths in low-income countries in 2015 were caused by the so-called “Group I” conditions, which include

In contrast, less than 7% of deaths in high-income countries were due to such causes.

Lower respiratory infections were among the leading causes of death across all income groups.

All but 1 of the 10 leading causes of death in high-income countries were NCDs. In terms of absolute number of deaths, however, 78% of global NCD deaths occurred in low- and middle-income countries.

Injuries claimed nearly 5 million lives in 2015. 27% of these deaths were due to road traffic injuries.

Low-income countries had the highest mortality rate due to road traffic injuries with 28.5 deaths per 100 000 population – the global rate was 18.3. Road injuries were also among the leading 10 causes of death in both lower-middle- and upper-middle-income countries.