Inferential statistics attempts to study a sample, and then extrapolate/ generalize the findings back to the population from which that sample was drawn.

Naturally, this method is not fool-proof. There are two elements in the story: the Truth, and the Null Hypothesis. Depending upon one’s response, one could either be correct, or commit an error of judgement. Such an error could either be a Type I Error, or a Type II Error.

Since this is usually a confusing concept, I will attempt to explain it using a story.

Most of us have heard of Romeo and Juliet. Their families were sworn enemies, and would attack each other on sight. (If you cannot relate to this story, simply consider them to belong to opposing communities that would not tolerate such a relationship.) Under the circumstances, their falling in love was not just risky, but very dangerous. If discovered, they could both get killed.

Let us suppose that Romeo loved Juliet, and smuggled a love letter to her. In it, he declared his love, and asked for a response by the following evening. If she smiled at him the next evening, it would indicate a ‘yes’. Romeo, being unsure of himself, had been convincing himself that Juliet would have nothing to do with him. Anyhow, Romeo stands below Juliet’s balcony at the appointed time. Juliet does love him, but her mother fell ill suddenly, and she was so preoccupied, that by the time she remembers about Romeo, it is already bedtime. Romeo waited till it grew dark, then returned home dejected- his suspicions were true after all.

Romeo’s Null Hypothesis: ‘She does not love me’.

What do you think he finally concluded about Juliet’s feelings for him?

What were Juliet’s true feelings towards Romeo?

Let us assume that Romeo was more self-assured than in the previous instance. Juliet had been dropping hints that she liked him, but he wanted definitive ‘proof’. Romeo gate-crashes a party which Juliet is expected to attend. Seeing him there, Juliet decides to lay all speculation to rest. She declares that she is in love. Her friends insist on knowing who it is, but she evades giving a direct answer. Finally, she proclaims that her love is in the hall, and she would identify him by tapping him on the shoulder. Romeo is sure that she would tap him, as he was certain she loved him. Juliet made her way to where Romeo and his friend Mercutio were standing. As she reached out to tap Romeo, she stumbled and tapped Mercutio instead. Romeo was shattered- all this while he thought she’d been after him, but she was after his friend! What a terrible misunderstanding! How foolish of him to think she loved him, when, clearly, she did not!

Romeo’s Null Hypothesis: ‘She does not dislike me’ aka ‘She loves me’

What was Romeo’s final conclusion?

What were Juliet’s true feelings towards Romeo?

In this case, Romeo believed that Juliet loved him, but concluded that she loved another. As in the previous situation, Juliet loved Romeo. However, Romeo made an error of judgement this time as well. This is an example of a Type II Error.

Please note that the Null Hypotheses are totally different in both situations.

If the above story did not clarify matters, then the following picture should: 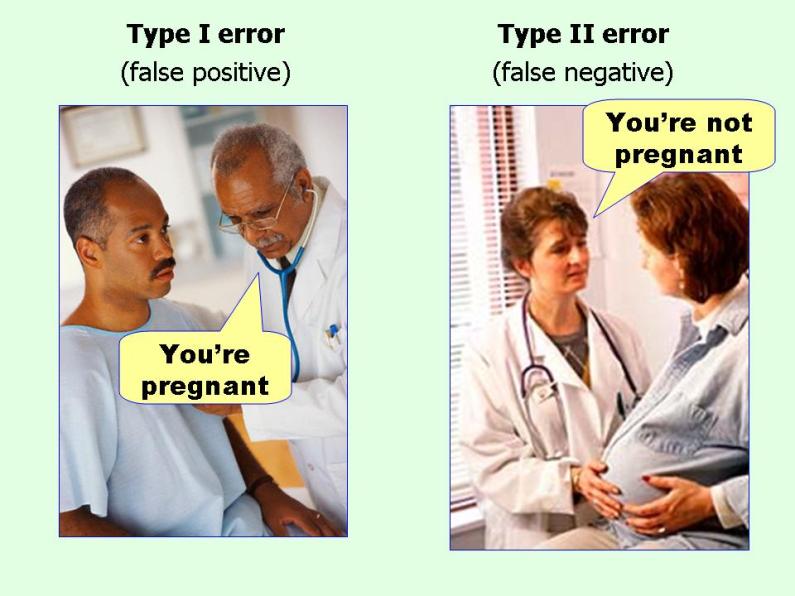 2 thoughts on “Fooled!: Type I Error and Type II Error”